It feels good to be recharged again with this incredible new app called Happs, but first a little context to explain why… 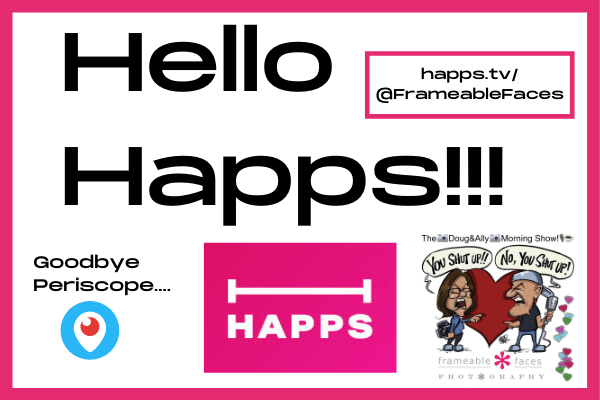 Periscope Changed our lives and then……nothing.

We’ve written and talked at length about Periscope – the livestreaming app that launched on March 26th, 2015 and we started broadcasting on on March 31st, 2015 at my buddy Alex Steinbock’s suggestion.  Right away we saw incredible potential to reach people around the world and share our studio in real time.  It took off for us pretty fast, and we made a big splash in the community with the first of several posts accompanied by livestreams where we did a fun take on the types of chatters and scopers you might encounter on the app.  Before we knew it we were trending, gaining thousands of followers around the world and being invited to speak at the Periscope Summit in San Francisco – which we did!  That was a magical weekend and a magical time in general – it’s hard to describe what it was like in this shared community of streamers from all around the world.  If you were there, you know.  Even the Periscope team was there to hang out even though it wasn’t “their” summit.  That was nice and they were cool enough, although I’m not sure they ever totally got what was happening on their app…

It was around this time that we went beyond just scoping for fun and it became The📷Doug&Ally📷Morning Show!🎙☕️  which we did daily and are still doing to this day (more on this in a bit), along with a whole schedule of other shows on the platform including one we developed with our friends from the Periscope network channel Parachute TV called “The Photo Shop” and a game show on the Play For Stuff TV network called “The Frame Game”!  We were having a blast.  We continued to meet people at meetups in New York City, here in Detroit and we met more Periscopers on roadtrips in Florida, Alabama and Mississippi!  We even photographed some of them.  Periscope eventually monetized the app which was nice as our generous community tipped us for the work we put into the show to help make the time and “effort” sustainable (even though it didn’t usually feel like “effort”).  Twitter owned Periscope and integrated it into Twitter so we thought the future was bright.  Periscope had a VIP program with verified badges for people who had bigger audiences and we became silver VIPs.  They had “office hours” in a Slack group to answer questions from VIPs and presumably to get our feedback as valued members of the community.

But then it changed…

Office hours suddenly started happening less and less and then they canceled the Slack group altogether.  A solid year or more went by with no updated features to the app.  Accounts started being randomly suspended and people – like us – got stripped of their monetization status leaving money contributed by their communities in limbo…with no explanation.  What a shame.  A real shame.  It seemed it was only a matter of time before yet another thriving app/community would be destroyed by Twitter (Vine anyone?).  We still kept on because our community was still tuning in and we were still having fun with our morning show, even starting up the Doug & Ally Morning Show Podcast, but we weren’t really innovating on the show itself anymore.  Like the app, it was running on autopilot.  And then just this week the announcement came – Periscope would be going away as a stand alone app.  Going out with a whimper.  Pathetic.

Almost instantly the buzz in the community turned to a livestreaming platform called Happs.  I was a little skeptical because so many livestreaming apps have come and gone such as Meerkat, YouNow, MeVee, Blab, Busker, and yes, Periscope.  But we downloaded it and set up a profile out of curiosity, and were immediately WOWED.  HELLO HAPPS indeed!

This app has a dizzying array of features and yet is very intuitive to use.  People suggested we move our show to Twitch for example, but I’ve spent some time on Twitch before and find it to be the most confusing user interface ever.  It makes my head spin.  On Happs I had us up and running in a matter of minutes and I’m blown away at what you can do there.  It’s monetized which is great, you can multicast from Happs to other platforms like YouTube, Facebook and Twitter all at the same time with all the comments from the other platforms in the same feed.  You can bring other folks into your livestream on camera, and you can put up links, graphics – heck you can do just about anything that you might think would be cool to do on a livestream.  There is an entire producer studio on the desktop version and you can work the controls there while you stream on your mobile device.  It makes Periscope look like Prehistoriscope.

The CEO and other members of the team have been engaging with the community dropping into broadcasts answering questions, taking suggestions and they have been extremely welcoming to this huge influx of Periscope users.  They are working their butts off to add servers, keep up with stability and adding features on the fly.  It’s an exciting time again!  They even “transferred” our Periscope VIP badge to Happs and verified our account.

So we’re all in.  We certainly hope they can sustain their success and we are going to do everything we can to help.  We invite you to join us in this reinvigorated community to have fun, meet people and discover new corners of the world you haven’t seen!  We’ll be on in the mornings T-F sometime around 10ish to 11ish EST for fun and shenanigans and maybe even a little photography hehe…

So once again, with great enthusiasm we say HELLO HAPPS!!!