Let’s start by saying none of the top 5 photos are actually published here in this blog post….  BOOO right?  It’s okay, I learned a little about copyright and fair use of movie images while researching this post.  We are certainly sensitive to people grabbing copyrighted images and using them illegally so I was curious about whether obvious and iconic images that appear everywhere are considered public domain or not.  So long story short… 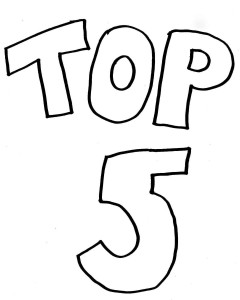 I went to this link after a Google search, found The Motion Picture and Television Archive and called the number listed.  A very friendly and helpful guy gave me a lot of good information and it boiled down to me having the option to purchase the photos I wanted from them if they weren’t public domain for $75 – $100 each.  Not horrible but more than I wanted to spend at the moment (when I have a massive following maybe I’ll reinvest into the blog in this fashion but I’m not ready for that).  He did say generally you can get an idea if an image was distributed by a film studio if you go to ebay and see one there for sale with the studio info printed on the bottom.  This generally indicates that you can use it.  None of my top 5 are available on ebay but I will provide links to them if they are available on the web – one for example is right on Wikipedia and I believe Wikipedia has the right to display it.  Whether the others do I’m not sure…  if they don’t and the image isn’t there when you click on the link then maybe they were caught and were forced to take it down…

Now for our top 5 – caution – there are spoilers here:

If this didn’t give you a chill the first time you saw it then nothing in a movie will.  When it’s revealed that Jack Torrance was always the caretaker at the Overlook Hotel when we see his smiling face in the July 4th, 1921 photo hanging on the wall it’s the perfect final scare to the scariest movie ever made…  The classic Kubrick slow zoom into the wall and then the photo builds the lump in your throat as you realize what you’re looking at.

Many Stephen King fans will agree that It was one of his scariest books.  While the TV movie with Tim Curry as Pennywise the clown didn’t quite do the book justice I still feel it had its moments – one of which was the depiction of the moving photo in the scrapbook that the kids are looking at together.  When Pennywise stops and sees that they are looking and makes a beeline to the surface jumping up onto the lamppost it’s a pretty good rush.

This film gave me nightmares after I saw it in the theater at the age of 11, and I still love it.  There is something creepy about the fact that the only photo which exists of Eva Galli is one where her face is blurred since she moves right as the photo is being snapped.  While I was able to find numerous images from Ghost Story I was not able to find the photo itself anywhere on the web.

In this groundbreaking film by Italian director Michaelangelo Antonioni a photographer takes a photo of two lovers in a park but discovers upon enlarging the photo what appears to be a dead body in the background.

This is a case where the photo itself isn’t scary or freaky, but the fact that it was a Polaroid negative required lengthy computer processing to become visible.  The photo was the only forensic evidence in a case with plenty of twists and turns and the processing creates a suspenseful race against time for Kevin Costner’s character who is ultimately revealed to be the spy all along.  Great movie, but once again I was unable to locate the photo on the web.

This suggestion came from someone on our facebook page when I mentioned I was writing this post.  While not actually “scary” or “suspenseful” since Back To The Future is a comedy, I’d be lying if this photo didn’t cross my mind and put a smile on my face when I was putting together this list…   🙂

Can you think of any others?