That’s usually how we start our morning show with those Larry Sanders Show / Howard Stern inspired words, and off we go….

The Doug and Ally Morning Show!

We have been broadcasting live on Periscope since April 2015 and somewhere along the way the “Doug&Ally Morning Show” became a thing.  It wasn’t planned.  It was early on an October morning, we weren’t doing much here at the studio and we thought it would be interesting to jump on Periscope and see who was up!  We don’t officially open until 10:00 AM anyway.  Turns out a lot of people were happy to see us on and someone made the comment that it’s like a morning show…  We thought that sounded fun so we kept doing it and here we are 8 months later going strong with the morning show “officially” Tuesday through Fridays from sometime around 8:45 or 9ish until 10 or 10:30ish.  It starts when it starts and it ends when it ends….

A Life Of Its Own…

Meanwhile many things have happened along the way that have become regular occurrences / features on the show…  One of the most well known guests is an amazing caricaturist from the UK named Rich Nairn (@RichNairn on twitter and Periscope) who has been known to join the show and tweet doodles based on what’s happening.  He sketches them in black and white but he made a color one which has become the official artwork for the show and will be available on T-Shirts (and maybe coffee mugs) very soon! 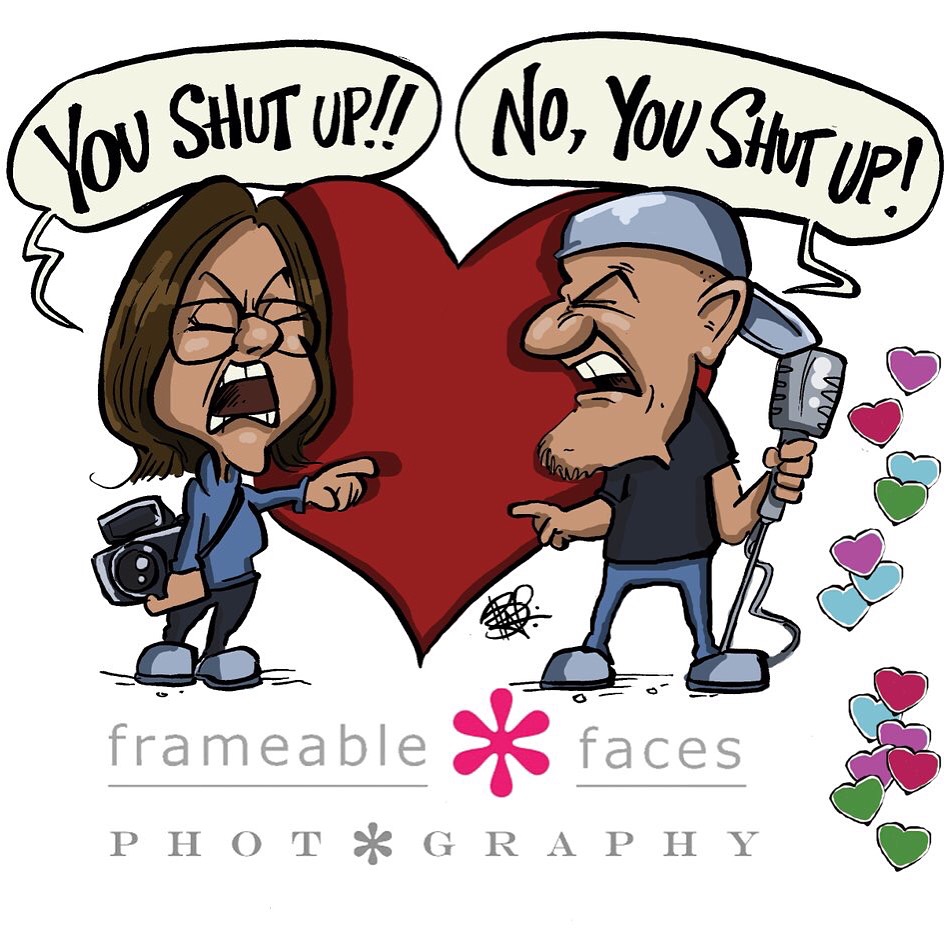 The phrase “You shut up, you shut up, and you shut up” has been an inside joke in Ally’s family which originated with her dad and it has become a common phrase on the show…  haha!  Notice the Periscope hearts going up the side to the right!  Here are a couple more of his from the show….

One morning we were discussing some pretty chaotic events at home in the hours before we came to work.  Ally woke up in the middle of the night with a spider crawling on her face, and I stepped in cat poop that one of the cats brought up from the basement litter box as a “trailer”….  Next thing we know Rich is commenting “tweet tweet” which usually means he’s posted a doodle and…… 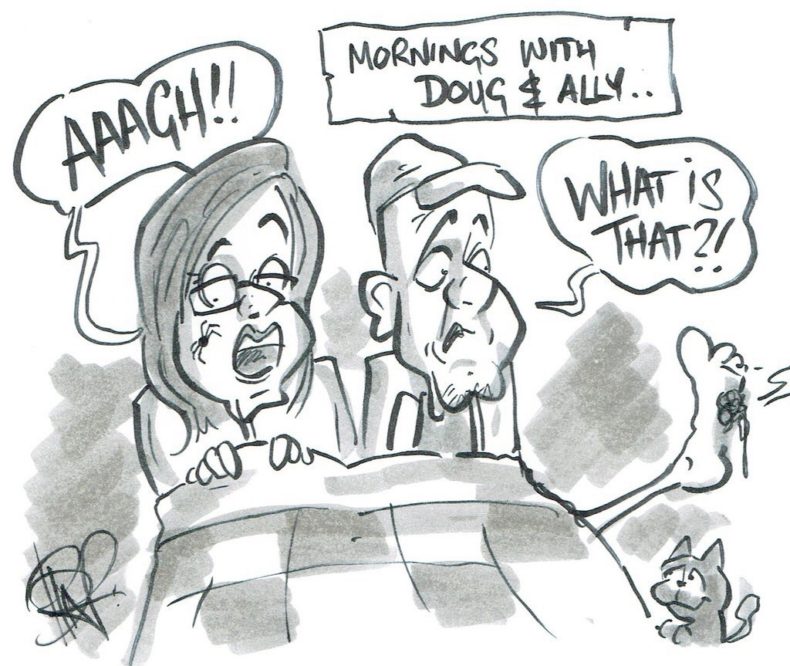 Here’s one more that we’ve featured before on the blog but it’s worth repeating.  We had a photo session with a newborn baby and at one point during the session we wanted to get some naked baby photos which are precious…..when the following happened – watch the following vine:

Holy CRAP this was an awesome baby session!!! ‍‍❤️ https://t.co/rLREc3Bg73

So we were talking about this session and then Rich tweeted…. 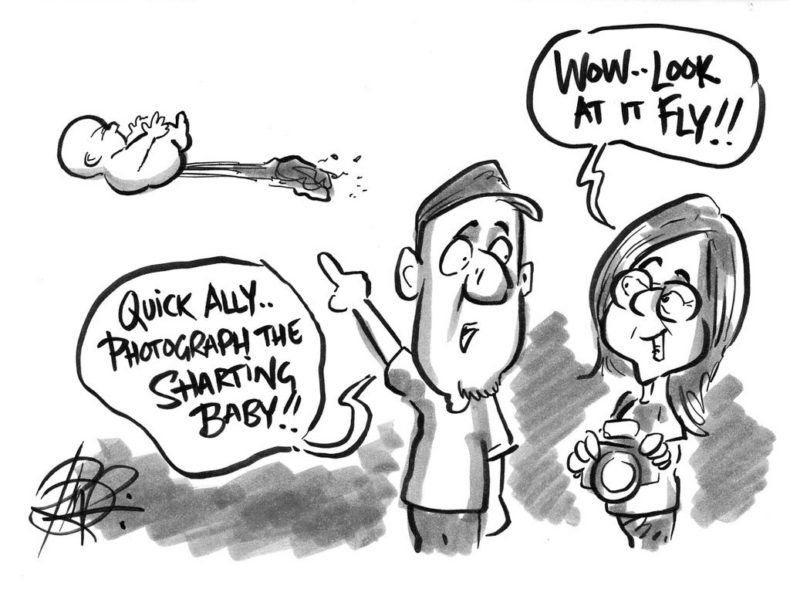 He really is amazing – he cranks these out in minutes….  Check out his fantastic work at his website The Artful Doodler!

Fun With The Feed!

I noticed that the thumbnails that show up in the Periscope news feed are sometimes amusing because they capture candid expressions of the person broadcasting and they refresh every few seconds, and so “Fun With The Feed” was born – with it’s own logo, jingle and everything!  No one knows when one of these might happen (nor do they know if they’ll be the next victim…). 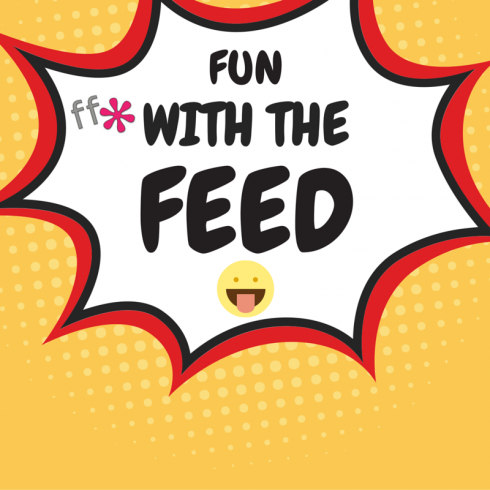 Here are a couple of our favorites… 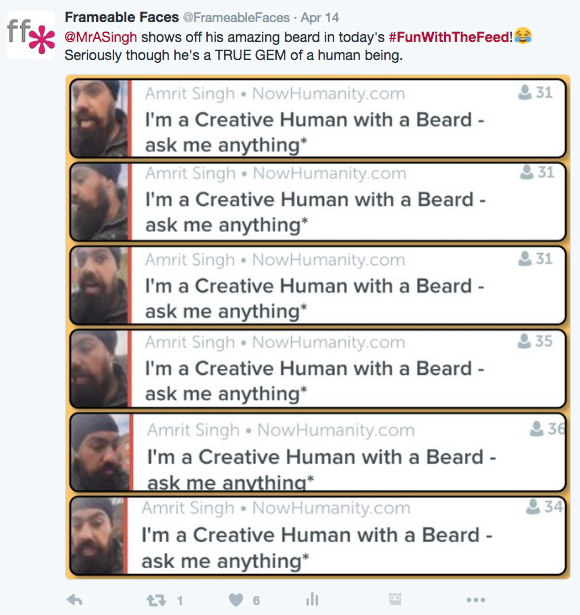 @Amrit Singh has an awesome beard so we thought we’d help him show off all angles of it.  Meanwhile the guy is awesome and has been doing some amazing humanitarian work in the UK helping with the refugee crisis.  We met him in San Francisco in January at the Periscope Community Summit (now called Summit Live). 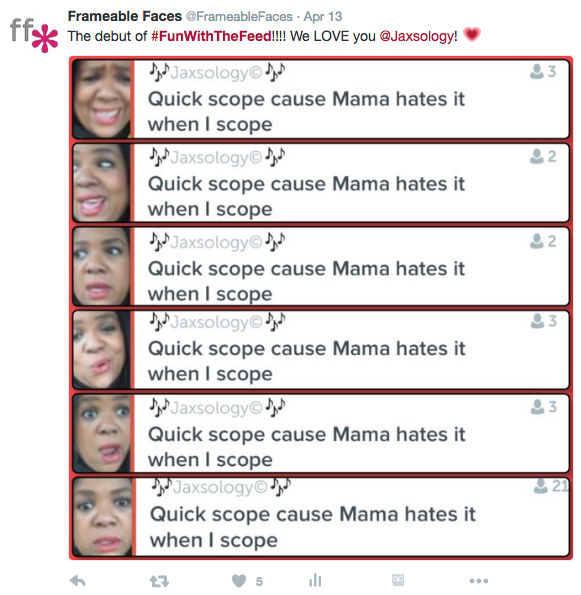 Ally and I do our cheesy intro ONCE per show followed by a tour of the studio where we talk about what we do and one of our Peri-friends Nelma – @BeachBabyC actually called in and narrated the tour on speaker phone one morning!  Nelma has dubbed our living room “The Parlor” which is a great name for our little meeting area with our clients!  We have call-ins to the show every now and then including a certain ridiculous telemarketing company who calls ALL THE TIME to try to give us great insurance rates on our 2013 Acura…   Um, we’ve never had an Acura. After asking them a dozen times to be placed on their do not call list we decided to turn the tables…  Take a look:

Many of our friends have their own special entrance when they show up on the show including Erick “@making_money23” Gary – all hell breaks loose when he shows up.  There is no real rhyme or reason to who gets an intro or why – they just kinda happen…

So join us!  There are plenty of features like “the coffee test” and spontaneous shenanigans that happen on the show and you can be a part of it just by tuning in and commenting!  We have a ton of fun and we love our international community who joins us literally from all corners of the world (Russia, Malaysia, Israel, UAE, Brazil, Serbia, Japan, Australia, UK, Spain, France, Morocco, Venezuela, Turkey, India, Pakistan, Ukraine, Germany, The Netherlands, Nigeria, just to name some) every Tuesday through Friday morning (and sometimes Saturday) for the Doug&Ally Morning Show!!!

4 responses on “The Doug and Ally Morning Show on Periscope!”