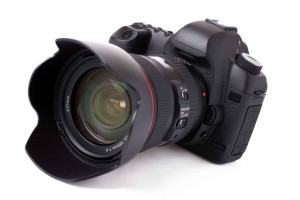 We follow most of our favorite vendors and partners on twitter and facebook and we are committed to buying local when we can, so when it dawned on us that we hadn’t given  any online love to Camera Mart we decided to remedy that situation immediately.  For starters, we decided to make a little impromptu and extremely amateurish video of our trip there yesterday to buy some grey paper for an on-location photo shoot for a dance studio (plus we think the grey will be great in the studio too).  Caution: This was NOT done under professional video supervision and you should absolutely try this at home.

A Visit To Camera Mart!

Camera Mart carries all the major brands of just about every type of equipment you need in the field of photography.  They have a great selection of lenses, accessories, printing equipment, backdrop paper, camera bags, you name it…

It seems like everyone there has vast expertise not just on the products but the applications for the products beyond what you find in a product manual.  They can advise on practical uses for your photography and your studio which makes a big difference when considering your purchase.  Camera Mart also holds “demo days” at the store where you can come talk to representatives of most of the major brands they carry and attend various seminars to improve your knowledge.

Maybe most importantly they are a good old fashioned local merchant – we identify with that!  Remember according to the 3/50 Project for every $100 spent in locally owned independent stores, $68 returns to the community through taxes, payroll, and other expenditures.  If you spend that in a national chain, only $43 stays here, and if you spend it online nothing comes home.

So take our word for it – if you are looking for the best camera store in Metro Detroit, Camera Mart is the place to be!

We had our second annual high school senior spokesmodel party yesterday for the Frameable Faces class of 2013 and it was a blast!  Our group of 11 had been looking forward to this for a while and to finally see all the spokesmodels in the studio together wearing Frameable Faces t-shirts and having fun is one of the real highlights of the year for us.  Each year we try to take it up one more notch and we definitely did this year…

When the spokesmodels arrived yesterday all of their t-shirts were laid out on a table with their spokesmodel cards which they can pass out to their friends. 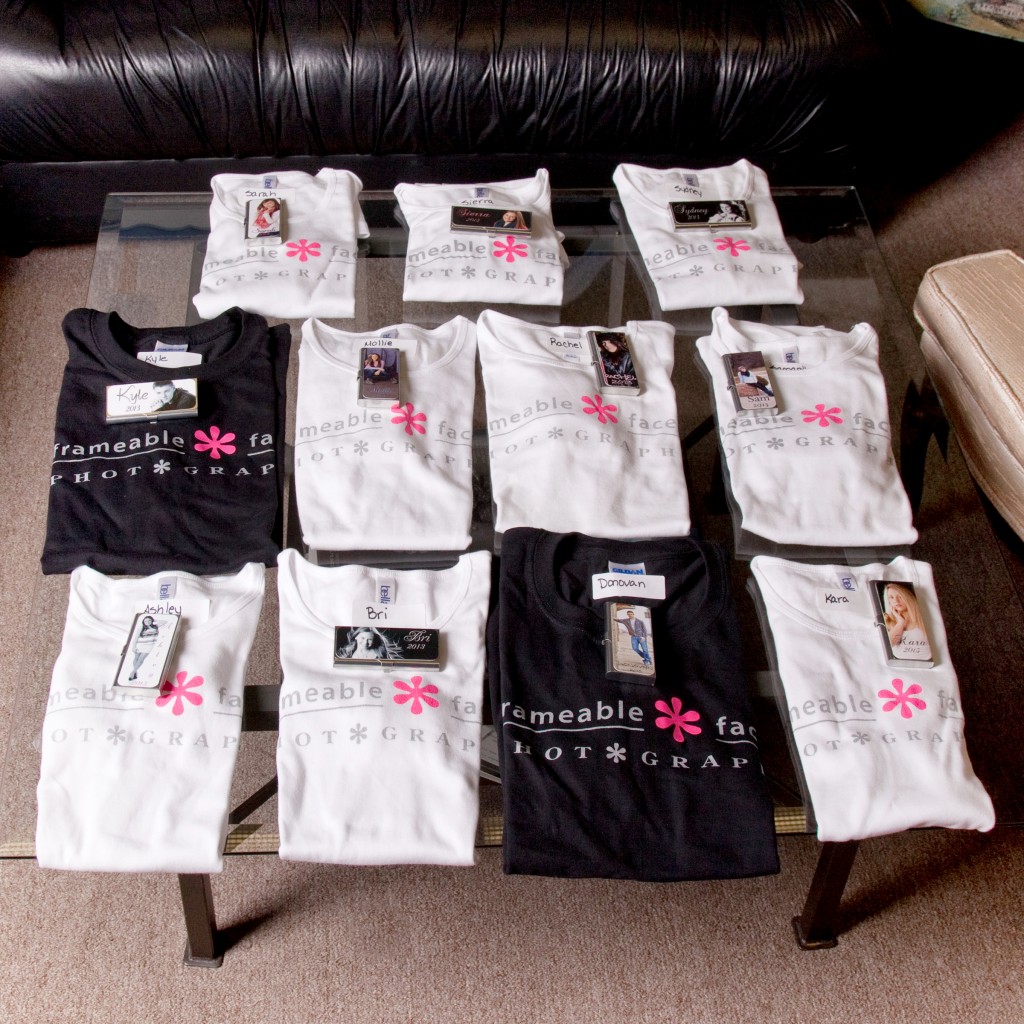 Once everyone arrived and introduced themselves to each other they started exchanging cards and I think some sort of card game broke out…  hilarious!

Next was a special presentation – this year we added the spokesmodel video which includes video clips and images from each of the sessions – take a look!

After raucous applause we got down to the business of taking pictures for this year’s composite photo which will be revealed soon so stay tuned!  We can’t wait to see the results of this – in the meantime here is last year’s from the class of 2012 which adorns one of our studio windows as a huge mural!

We were about to eat dinner next but everyone decided that they had to first put on our tutus for some bonus fun – what is it with seniors and tutus?  Meanwhile one of our spokesmodels (Kyle) had to leave early leaving Donovan as the only boy – I don’t think he minded and things got pretty funny as you can see by clicking the link below…  at this point Samantha hadn’t arrived yet so this is everyone minus Kyle and Samantha….

At that point we ate some pasta and salad for dinner, and then we finished off the night with the piéce de résistance – the Just Baked cupcake tower with a Frameable Faces cake on top!!!  The Chubby Hubby, Red Velvet, and Grumpy Cake cupcakes were the first to go….  YUM!!!! 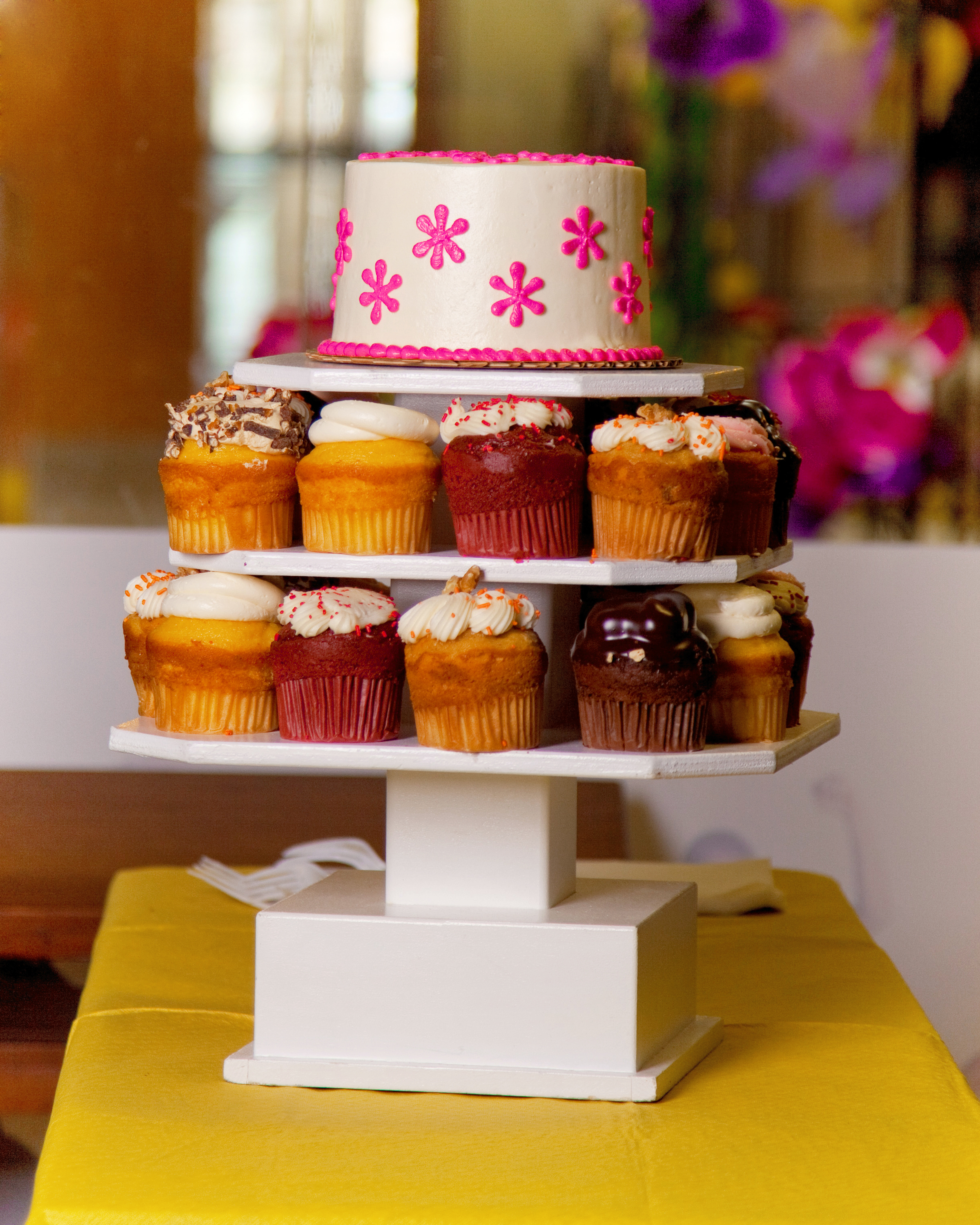 All in all it was a great night and we are so happy to have these amazing young people representing our studio!  As someone said during the party, “Peace Love and Frameable Faces”!!!!

We’ve been photographing this family since before they were a family!  M was one of Ally’s first subjects when she went back to school to study photography.  They’re like family to us here and we always welcome a session with them whenever they ask.  The fact that they’re insanely photogenic doesn’t hurt either!! 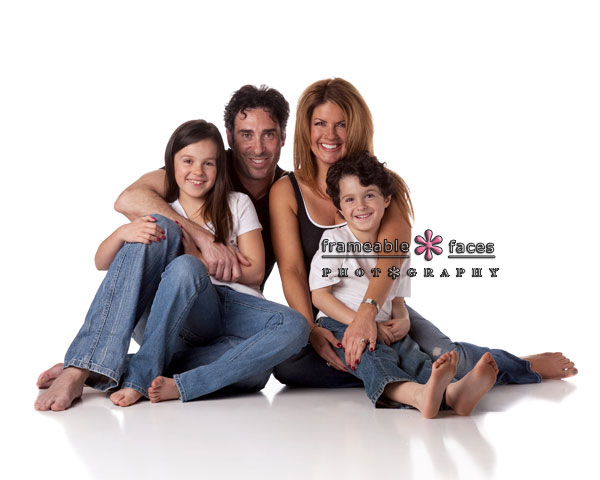 The “reason” behind the timing of this photo session was that “R” was getting braces the very next day, and M and T wanted a fun family photo session before she got them.  🙂
Ally loved getting some of the fun “interactive” poses with T and B and the sweet, loving mom and daughter poses with M and R, too.  But when the kids got together in their poses, everyone ended up collapsing with laughter.  Those two could have each other in a headlock one second and pull out the best, most amazing expressions in the next.  They’re just like our own kids – laughing and smiling in one moment but then they’ll switch modes on a dime and push each others buttons in the next!  The G family is one that we’ll claim as our own….whenever we’re around these guys, laughs are abundant, fun is obvious and great times are had! 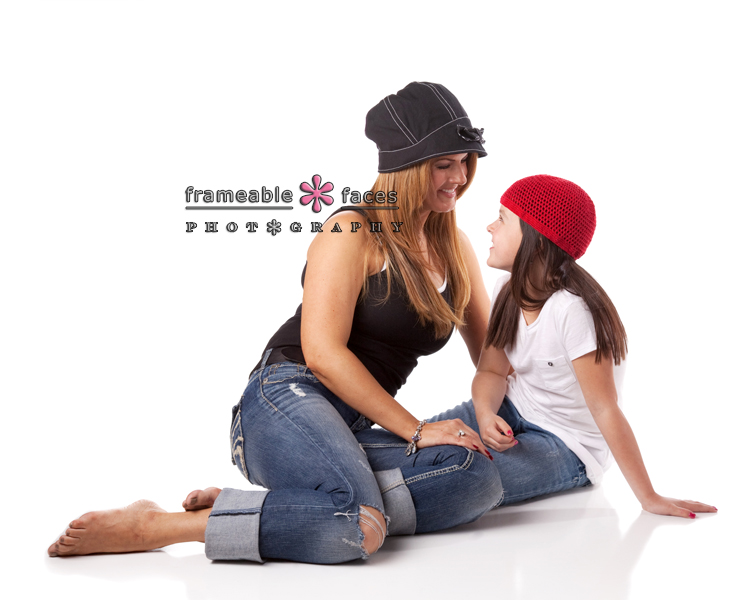 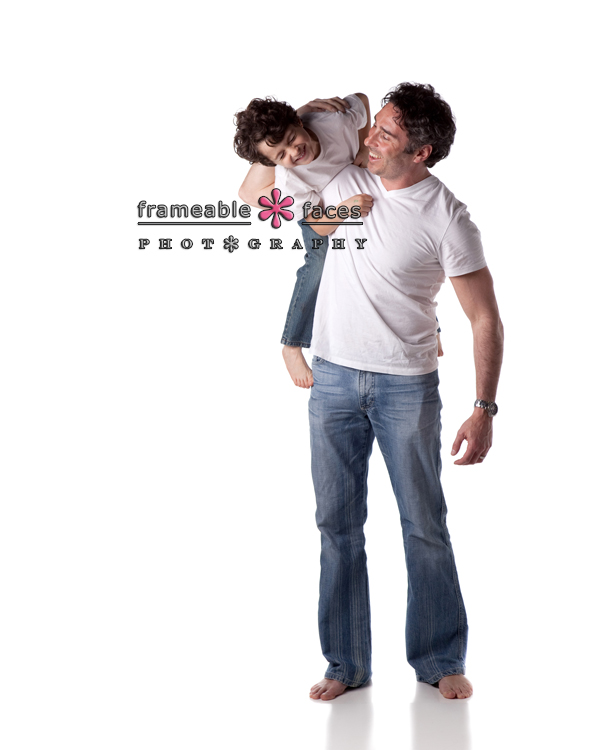 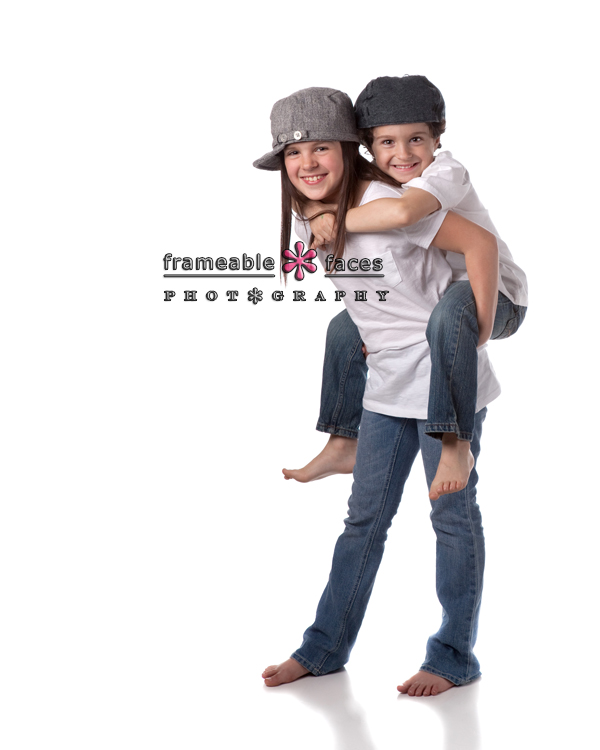 At Frameable Faces we spend a lot of time on social media and facebook in particular.  Sure it’s primarily how we market our business and I personally spend a ton of time on the various platforms because I consult on on the side, but it also dominates much of the conversation with our clients in general because we post sneak peaks and/or video clips from the sessions on facebook, this blog, YouTube, even Google + a little, and we tweet as well so it’s just naturally a popular topic.  We also pin, use LinkedIn (although frankly we have a ways to go on LinkedIn as a brand) and a few of the others. 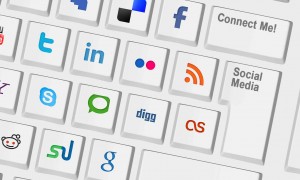 Based on my own observations I’m not sure the typical casual end user knows where to go for help to get more out of social media for themselves.  The social media “gurus” focus much of their content on how brands can build and engage with their peeps, but who is helping the customers to get the most out of social media?  People still seem to get frustrated with facebook or don’t quite get twitter for example.  So while this is by no means a comprehensive list I thought I’d provide a few of my own tips to help you manage and benefit from the information available on social media platforms.

1.  “Like” and more importantly interact with your favorite brands on facebook.  More and more companies are dedicating resources to maintaining a presence on facebook and interacting with their customers there.  The company website will have information sure, but you can usually interact with your favorite store, restaurant or TV show in daily discussions if you like on facebook.  Keep in mind that hitting the “like” button, adding a comment to the conversation or even sharing something you find really worthwhile with your facebook friends will help ensure that future posts from that brand continue to show up prominently in your news feed.  This is why the interact part is so key.  Plus by liking, commenting and sharing you are putting your own stamp of approval on things that are important to you for others to see (which is one of the social aspects of social media).  So as you can see you can essentially craft your own personal flow of the information you care about on facebook.

2.  The “unsubscribe” button is your friend.  If that annoying acquaintance from high school finds you and insists on telling the world that it’s cold outside every time it’s, uh….well…. cold outside, or that they didn’t sleep well, or who you should vote for, you can just hover over their status update and unsubscribe from their updates.  This goes for all of your settings when it comes to customizing your content and your privacy.  I still hear a lot of people say they don’t want to be on facebook or don’t like facebook because they don’t want people to know a bunch of information about them, they don’t want to be in contact with a bunch of people from high school they don’t care about, or they don’t care what people ate for breakfast.  Facebook has evolved a lot over the last couple of years and you don’t have to share anything you don’t want to share, you can select who sees what, and you can unsubscribe from annoying status updates without potentially hurting someone’s feelings by de-friending them.  These are all easy and intuitive tools and if you don’t understand them then ask someone who does.  It’s very easy to tailor facebook to your interests so that it becomes a valuable source of information while still filtering all the noise.

3.  Follow your favorite brands, news outlets, blogs and teams on twitter.  If facebook can function as a good flow of information and interaction with friends and brands, twitter can positively be your personal AP wire.  I remember when the first smartphones came out and were shortly followed by sports scores apps where you could pick the teams you cared about to get updated scores.  Cool right?  Except they never worked, you had to launch the app to get the updates and then they were barely ever updated.  Now many sports teams will tweet frequent updates during a game beyond just the score, including stats and even brief mentions about how rowdy the crowd is or if the momentum has shifted.  If you want to follow the Detroit News you’ll get breaking news throughout the day.  If you follow local blogs you can get updates on what’s happening around town.  If you follow your favorite brands you can get updates on their products and content related to those products.  You can tweet and retweet as well and build relationships but you don’t necessarily have to to get a lot out of twitter.

4.  Make use of lists on twitter.  If you start to really dig twitter and find that it’s a great way to stay up to speed on the things you like you may start to find that following too many tweets becomes a little overwhelming.  Unlike facebook where your interaction and/or unsubscribing can help shape your news feed, on twitter you are either following or unfollowing a tweeter and that’s pretty much it.  You might miss some tweets you may have cared more about because they quickly made their way down the wire behind a slew of other tweets from all the tweeters you are following.  That’s where the use of lists can come in handy.  You can create lists within twitter and name them by category, slot all the different feeds into the categories and then view the feed for each category.  Some of our lists (most of which I’ve left as publicly viewable if you’re interested – you can even subscribe to them) are “Social Media focused”, “Local Detroit / Michigan”, “Photography” and “Bloggers”.

5.  Have fun and be smart about it.  This is general advice but people often talk about how each new platform is just a new “time suck” – a way to keep themselves from being less productive.  Pinterest for example can certainly be that way, but if you think about it as the virtual pinboard that it was designed to be then it can be useful – as if you were pinning things up on a board in your kitchen for use later.  YouTube?  Subscribe to the official channels of brands, people, teams, things that are of interest to you instead of just aimlessly searching for the new fun popular videos.

What are your favorite tips?  Now it’s your turn to interact – remember?