We took the show on the road for the Frameable Faces Spring Tour 2017 and it was an amazing odyssey through the deep South of America!  The trip took us over 4000 miles through seven states, three Civil War Battlefields, two college football stadiums, encounters with alligators, sharks, deer, roosters, tortoises, salamanders, and various other wildlife, two photo sessions, friends, family, and a whole lot more…! 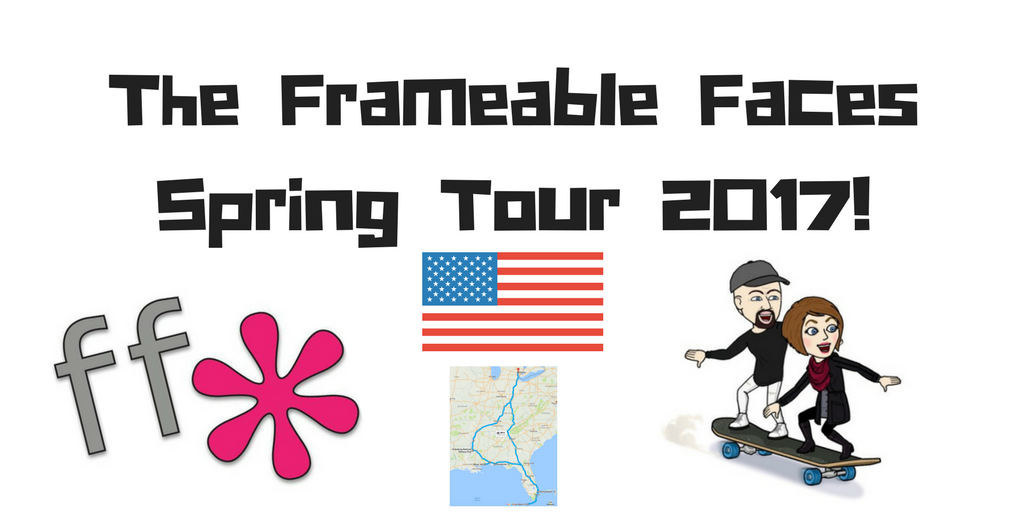 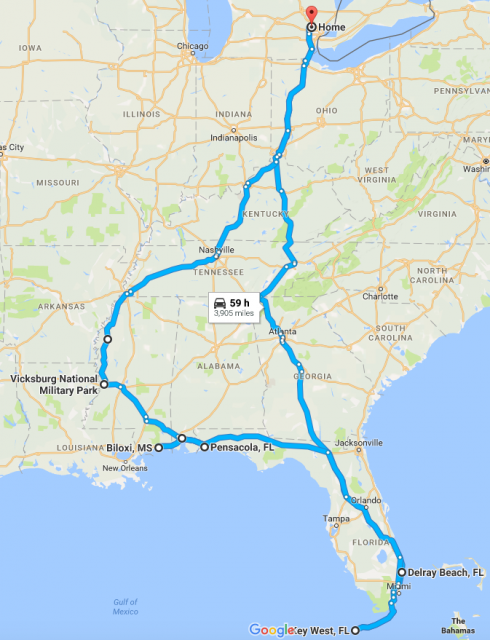 We Periscoped, Tweeted, Snapchatted, and photographed our way around this amazing country and we loved it.  So let’s recap in order – hope you enjoy reliving the tour with us!

Here’s where it all starts – we were so excited….  hehe.

Day 1 was brutal.  We wanted to leave at 3 and didn’t get on the road until 4:30.  Okay fine – that’s not unusual, but it took us TWO hours to get to the Ohio border which should only take an hour.  There was awful traffic and the weather was horrible, in fact it poured sheets of rain almost the whole way to Chattanooga with major thunderstorms.  So I white knuckled it with my eyes burning doing about 50 MPH most of the way and we didn’t get in until 3:30AM.  Ugh.  But even though Ally, Lacey and I (not Tony) have switched to a plant-based diet we suspended that for our traditional first meal at Skyline Chili along the way…

We got a slow start the next day obviously, and we made it down to Gainesville, FL the second night to stay with our friend Cathy Hackl and her family – we’ve known Cathy almost 2 years now from Periscope and we’ve hung out together in Northern Michigan, California and Florida – we did family portraits for her before and those highlights are here on the blog.

Here’s the first Periscope broadcast of the trip just checking in with our peeps from the road in Georgia on the way to Gainesville – Ally handled the broadcast while I kept focused on the road…  If you don’t have Periscope yet you can download it and follow us at @frameablefaces at this link.

We had a nice visit and Cathy took us over to the University of Florida campus the next morning to check out the campus and “The Swamp” – their football stadium which was pretty cool.  We Periscoped from the stadium as well!

From there we headed down to Delray Beach on Saturday where my parents stay for the winter and we had a couple of great days down there with them, but not before a quick stop in Kissimmee to see Scott and Kristi – aka @FloridaPlunge on Periscope.  Check out their website FLORIDAPLUNGE.com! 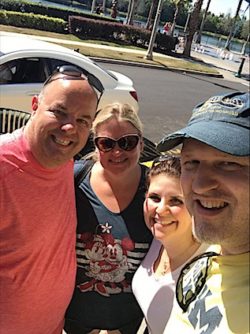 In Delray Beach we visited with cousins and friends, got a little sunburned on the beach (ouch) and took a little drive over to Alligator Alley on I-75 to look for gators which we did the last time we were down there too…  This time we only saw a few in the first few minutes of the Periscope we did… 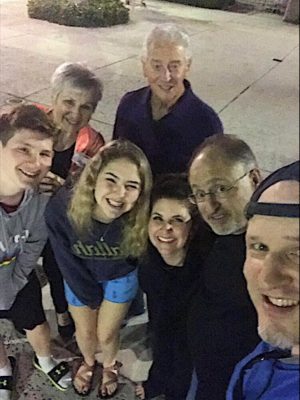 With my parents and cousin Joel

Wednesday Morning we woke up and got on the road down to see my old college teammate Steve and his wife Amy, their daughter Jamie, and their various pets….  The drive alone down to the Keys is spectacular and we Periscoped part of it once again with Ally manning the iPhone and me doing the driving!

We stopped along the way in Tavernier to grab a key lime pie at the Blonde Giraffe – best key lime pie in the Keys!  We snapchatted the pie (which as a side note you can see at the end of this post).

Once we arrived at Steve’s house we settled in for a couple days of eating stone crab claws, lobster, cobia, and barrel fish – so delicious….  We were also happy to see Peanut – Steve’s pet tortoise….  He was tiny last time we saw him – maybe the size of a basketball.  He’s grown quite a bit…

Here’s an extended Periscope replay of Peanut chowing down on some salad. 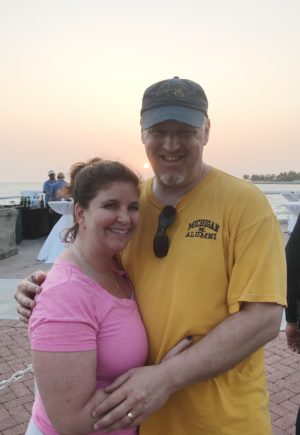 We went back down to Key West on Friday morning for a snorkel adventure where we saw a 5 foot nurse shark!!!  I bought a waterproof case for my iPhone but found it way too difficult to manage especially with an iPhone 7 because of the “taptic engine” button that wouldn’t work through the plastic… so I have no photos underwater.  But that’s okay – it was amazing.  We saw plenty of ocean life including a huge grouper, colorful coral and plenty of other fish at the reef in addition to the shark. 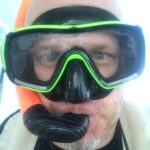 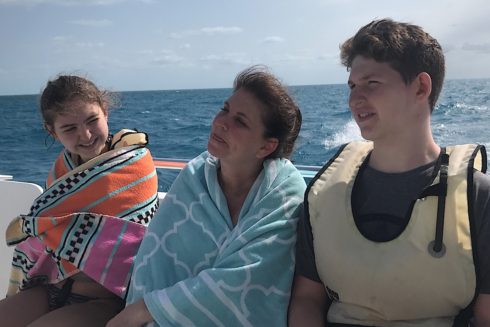 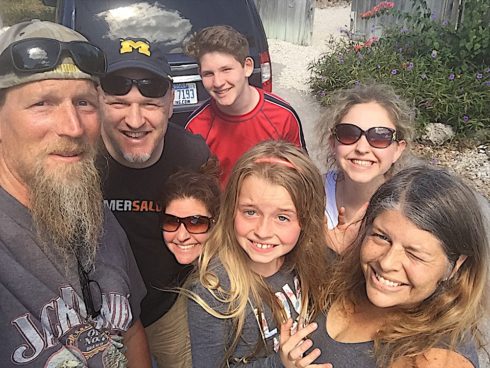 The drive up to Pensacola from Delray Beach is a haul… but we got up early and arrived in the late afternoon for a photo session with our friend Nelma, her husband Alfie and their sweet little one Lydia!  We’ll save that Periscope for the separate blog post of her sneak peeks but in the meantime here’s a couple tidbits – a panorama I grabbed with my iPhone of Ally photographing them in Plaza Ferdinand VII (more on that below in the snap story)….

….and here is a little behind the scenes collage we posted on Instagram. 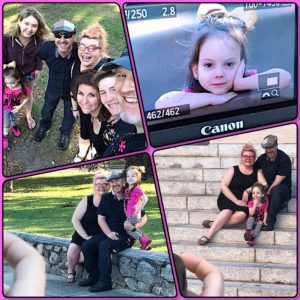 We stayed with our cousins Daria and David in Pensacola and the following morning (Sunday) we drove first to Mobile to visit a certain Sock friend of ours….

Definitely one of the most fun Periscopes we’ve ever done!  We had a great visit with Jason and Amanda (Sock Cop hangs out with them from time to time… lol)! 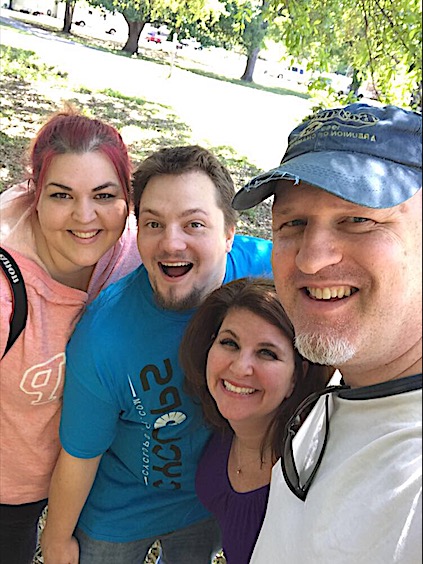 From there we drove to Biloxi, MS to do a photo session with another friend we met through Periscope – Lana and her (now) hubby Chase!  You can see the sneak peeks and read all about that at this link, and in the meantime here is the behind the scenes collage we posted from that session on Instagram… 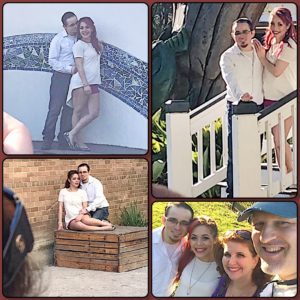 We stuck around for an extra day in Pensacola and celebrated Passover with our cousins so with the extra time we went over to the Gulf Islands National Seashore where the beaches are gorgeous and where you can take a walk through Fort Pickens which the Union controlled throughout the Civil War. 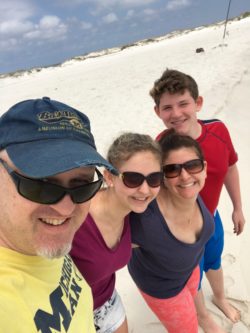 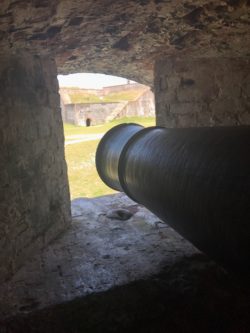 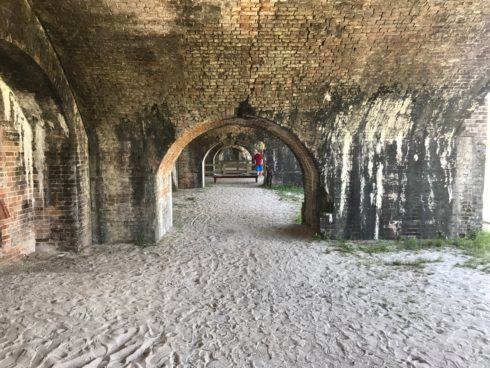 I think this panorama that I took of Fort Pickens is pretty cool….

We headed out on Tuesday morning towards Mississippi bound for Hattiesburg and Vicksburg.  We made a stop at Southern Miss University to visit our friends the Hopsons – Jay is the head coach for the Golden Eagles and we hadn’t seen them since his 2 years coaching the linebackers at Michigan.  We had been through Hattiesburg once before on a road trip, the campus is really nice and their stadium “The Rock” is very cool.

We are at THE ROCK at Southern Miss!!! Go Golden Eagles! #FFSpringTour17 https://t.co/KnELz7FY8c

From there we raced to Vicksburg National Military Park to check out the battlefield before it got too late…..and it was kinda too late – to drive the park anyway.  But we were able to walk a few miles of it and it is really impressive. 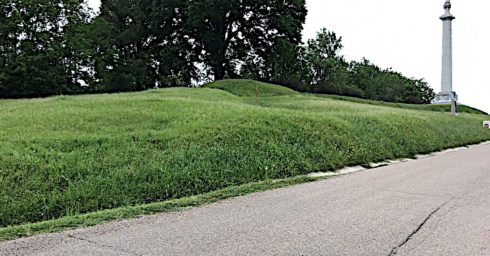 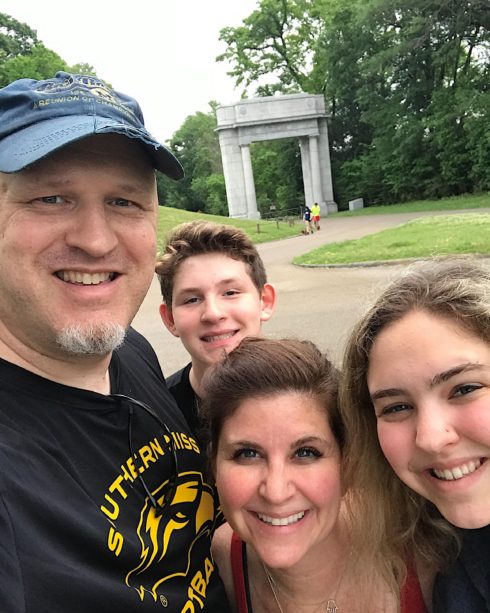 From there we drove all the way up the Mississippi Delta on Highway 61 to Memphis where we spent the night.  If you ever make that drive from Vicksburg MAKE SURE you have gas….  there are zero gas stations for about an hour.  Heck there’s almost zero civilization for about an hour…

After a yummy breakfast at Staks Pancake Kitchen with one of Lacey’s friends in Memphis the next morning we made the final leg of the drive back to home sweet home but not without a stop first at Parker’s Crossroads Battlefield in Tennessee…. 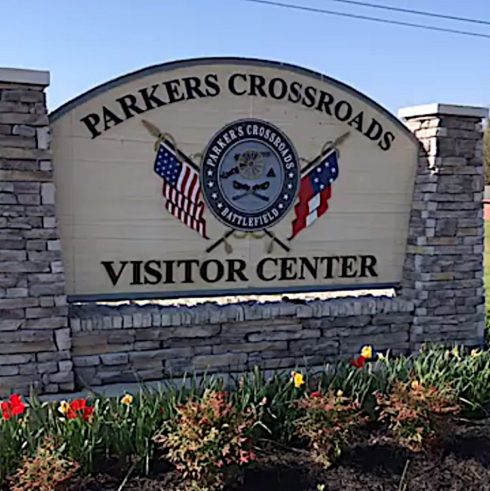 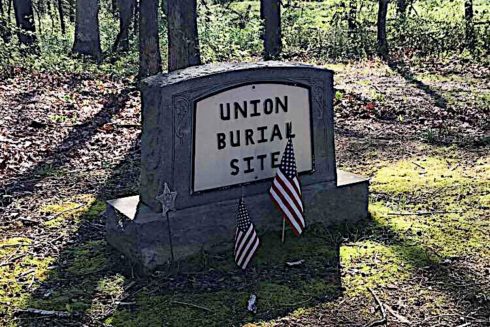 ….and a stop to visit with one of our favorite seniors of all time Kim (who was also an intern for us) in Nashville where she has been working since finishing her undergraduate studies at Vanderbilt! 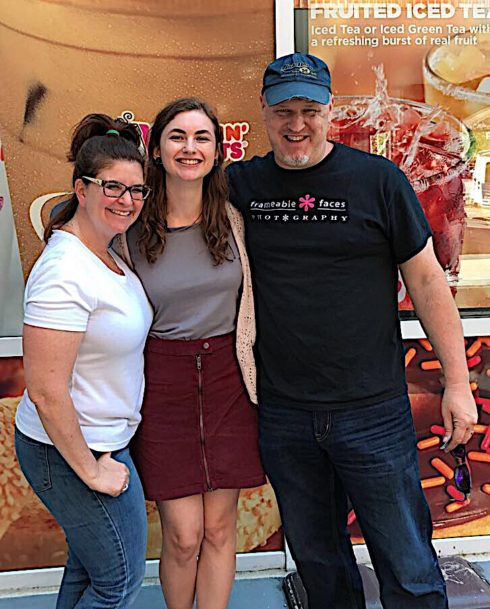 And with one more stop to visit another one of Lacey’s friends in Louisville, we headed all the way back home.  Home sweet home, in our own beds, exhausted and fulfilled by our Spring Tour 2017 – an incredible odyssey through a large swath of the USA that we’ll never forget!!!  We hoped you enjoyed the recap and we’ll leave you with the entire snap story from the trip – additional photos and fun with all the geofilters intact!