Yes that status was 5 years ago!  It’s hard to believe…  Ally’s dream of having a real studio of her own has become a reality and we love doing this together.

Those who were around us and the mall back then might remember that this really started off as an experiment of sorts.  The mall had several vacancies but tenants were starting to move in which at the time was really bucking the trend – this was right in the middle of the Great Recession and Detroit was the epicenter of the whole thing.  Things were quite bleak around here but there were exciting things on the horizon at the Orchard Mall.  As for Ally, the first few months were basically spent just her by herself in this space with a desk, a temporary backdrop, her camera and a banner in the window to see if this could be a viable business…  She had been building Frameable Faces out of the house before this, photographing on location and this was a big next step. 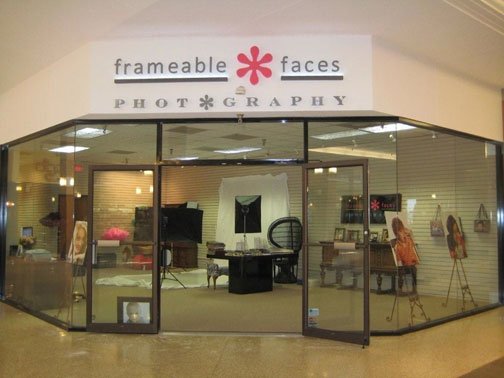 Starting to take shape – Frameable Faces in early 2009 – we had our new sign but no paint, furniture or much else!

I was working a dead end job at T-Mobile as a National Account Manager selling BlackBerrys to auto companies who were mostly in bankruptcy at the time.  I knew my days were numbered and Ally convinced me that when the time came that they showed me the door that instead of looking for another job we should pour all our energy into Frameable Faces Photography together.  It was a struggle to be sure growing a new business in a really rough economy, but we had never been happier.  I like to say that Ally “rescued” me from corporate America and I used to use the line that I was “way happier struggling than when I was miserable making money” and it was true!

So here we are 5 years from that first status update about getting the keys to the empty space in our beloved mall and opening up the studio, and in some ways we feel like we’re just getting started!  We’ve come a long way – we’ve made so many friends and met so many incredible “Frameables” along the way.  We are forever grateful for all of you and we look forward to what’s next!!!  Cheers to 5 years!!!

2 responses on “A Dream 5 Years and Counting!”