Where do we begin with Taria and her EPIC senior session in the city – the city of Chicago that is!!!  Okay let’s start with Periscope – impossible not to start there…

We met Taria’s mom LaTannya on Periscope about a year ago and loved her right away.  She’s hilarious and we started hanging out in each other’s broadcasts which led to a visit to our studio when she was in Detroit with her sweetheart of a daughter Taria!  That night a random person in the mall popped into the studio with a British accent which is a whole other backstory in itself (which some of our Periscope peeps will be familiar with) and without going into too much detail let’s just say all heck broke loose!  Here’s a snippet from Vine…

You can see Ally, LaTannya and Taria all dancing with the friend we made that night!

Flash forward to this year and LaTannya had been saying that she wanted us to take Taria’s senior pictures which we were so excited for!  The original plan was for them to come to Detroit, but we received an invitation to speak at Podcast Movement 2016 about Live Video in Chicago so we thought how cool would it be to do the location part in Chicago while we’re there?  The invitation to speak at PM16 didn’t come with a ton of advance notice so we got on a Skype together to plan the whole thing out, and we made it happen!

This was a session that had a little of everything in the way of obstacles and challenges – a ton of traffic for LaTannya and Taria coming downtown, A Taste Of Chicago going on in the area we were shooting, storms hovering in and around Chicago, protests, blistering heat, and a couple of creepy dudes.  And yet, teamwork prevailed and we kicked some butt, Taria was a superstar and the session turned out amazingly!  And we made another friend which we’ll get to later, but in the meantime let’s get into the photos!

We started at Grant Park and this was the part of the session we broadcasted live on Periscope.  That alone was a surreal experience since we met on Periscope and it wasn’t lost on us that an app brought us together in such a wonderful way!  We’ll start with this smiling close up of Taria: 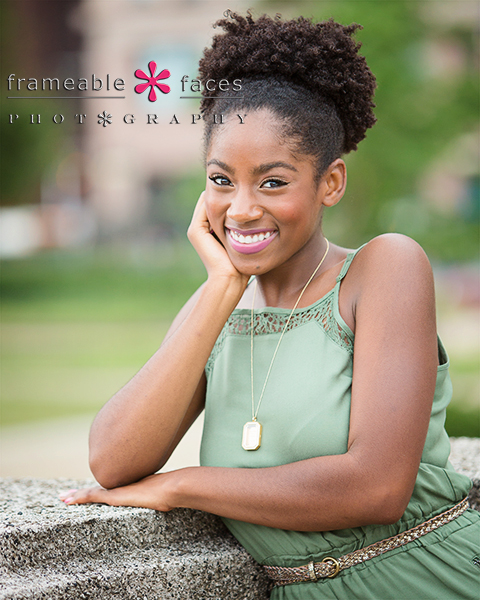 At this point the rain started to come down and we took shelter for the delay…  Before we get back to the rest of the photos let’s take a look at the behind the scenes action from the day – first with our fun Vine for your 6 second looping pleasure:

Next we have the replays of the live Periscope broadcasts from the day from our YouTube channel.  The second part includes the hilarious Uber ride to the Adler Planetarium for our night time skyline shots.  Denise the Uber driver was amazing and once again it turns out that making friends seems to be a theme when we get together….lol.

Once the rain let up we headed into the Taste Of Chicago for an idea we had for Taria posing with a bunch of people around in the background.  We got a few great photos but it was amusing to see people walking in front of Ally oblivious to the fact that a photo shoot was going on – not that it was their fault at all – we were the ones who picked a crowded event to just plop down and start taking photos.  Meanwhile we got some great results including this one: 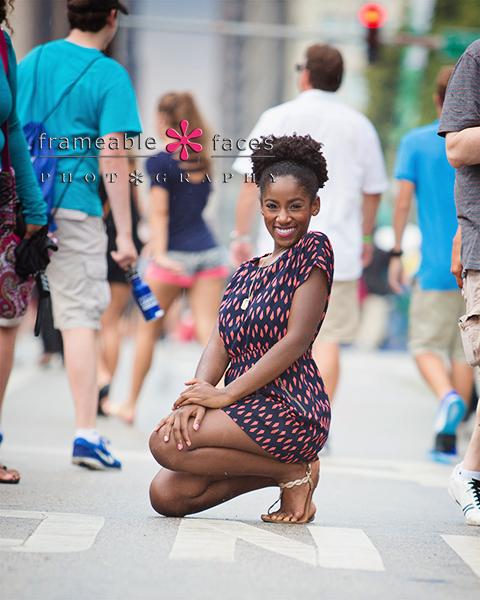 We did have a chuckle at one point when LaTannya took matters into her own hands and decided to “direct” traffic a little…. here’s a shot of that scene that didn’t quite make it into the proofs…  Haha!!!

…and that’s why we LOVE LaTannya.

At this point we headed back over to Michigan Avenue where there are some great old buildings with some great textures for another series of photos in another outfit.  Here’s one of those: 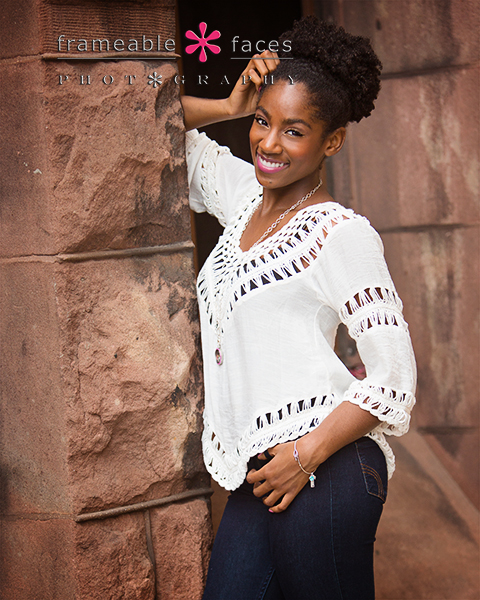 Love it.  Taria was really feeling it at this point – such confidence!

Taria In The City…

And here is the coup de grace…  After a break for dinner and some deep dish Chicago pizza we had our awesome Uber driver Denise take us out to the Adler Planetarium as you saw in the video for the best night time vantage point of the skyline for some off-camera flash photos.  Denise waited for us while we hopped out to set up the shot, and this was no easy task.  This is where I personally marvel at Ally’s ability under pressure to change camera settings, position off camera lighting, bump the flash power up or down and even position LaTannya with the hand held Ice Light to get the proper lighting and focus.  Here is one of the results…. 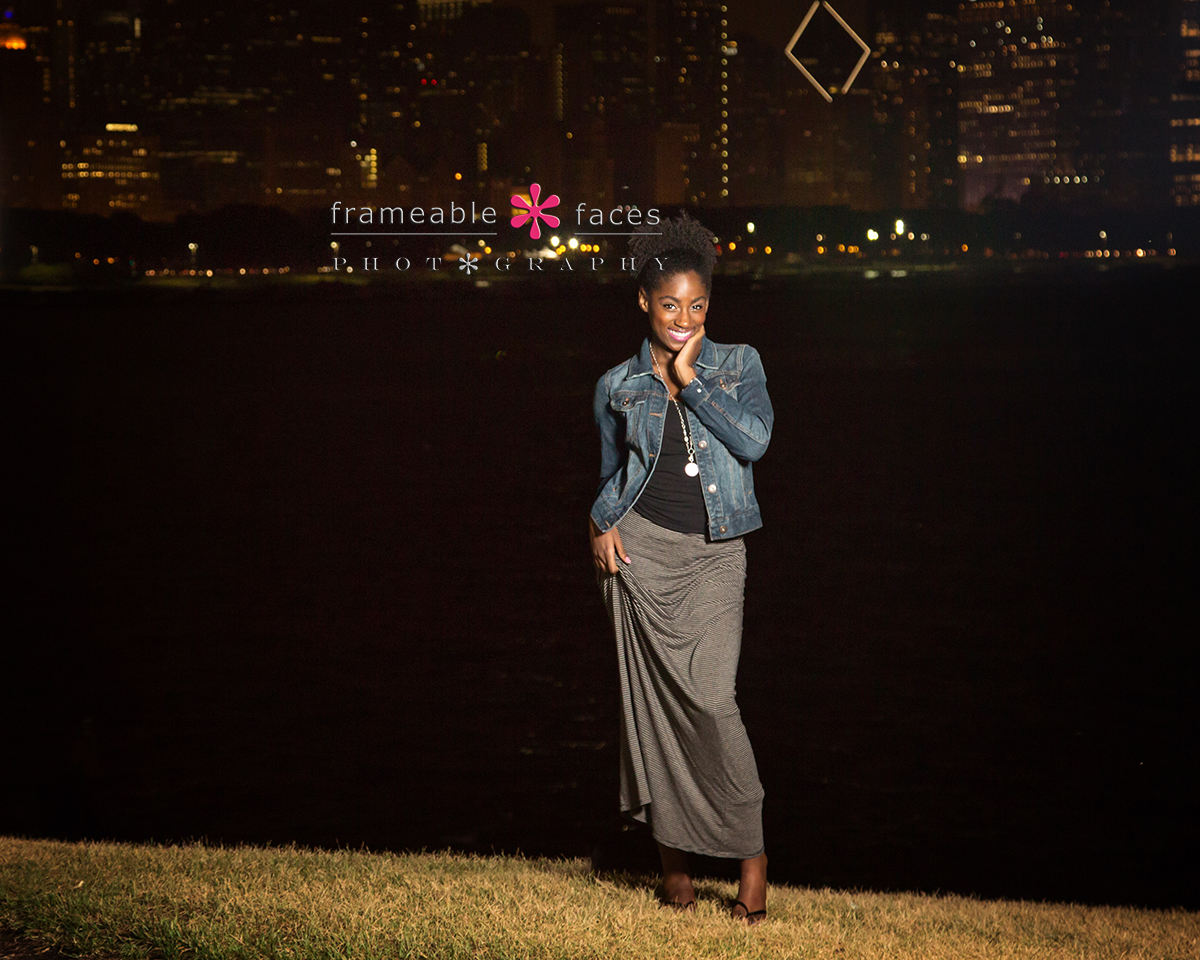 And there you have it!  This may actually be “part 1” here on the blog, because there may still be some follow up studio photos here at Frameable Faces with Taria in the near future.  Until then…. we hope you enjoyed the highlights of Taria’s session!

4 responses on “Senior In The City – Taking On Chicago With Taria!”