I am all about practicing proper etiquette online.  I am also all about being truthful.  Somewhere in between I find it can get a little blurry. 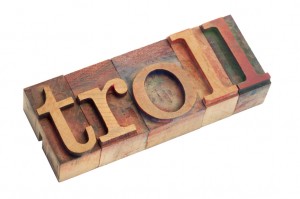 There has been much written about “trolls” – the Wikipedia definition of a troll is as follows:

In Internet slang, a troll is someone who posts inflammatory,[2] extraneous, or off-topic messages in an online community, such as an online discussion forum, chat room, or blog, with the primary intent of provoking readers into an emotional response[3] or of otherwise disrupting normal on-topic discussion.

I have yet to see any trolls on this blog (hope I didn’t just jinx it), but I find the above description to be a little subjective.  “Extraneous or off-topic messages” intended to provoke are obviously inappropriate, but I wonder about  the “inflammatory” messages.  Is posting a different opinion automatically a bad thing as long as you aren’t being mean or blatantly offensive?  Certainly people could view that as inflammatory, but can’t debate be healthy as opposed to everyone just agreeing and patting each other on the back?  Besides, intent is hard to measure and someone could get upset and have an emotional response even though no offense was intended or expected…  People blog, post, and tweet expecting and hoping for responses, so shouldn’t they be prepared for different viewpoints?  It reminds me of a scene in Pulp Fiction where Mia Wallace and Vincent Vega are having dinner at Jack Rabbit Slim’s (you can actually read the entire script here– pretty cool):

Who is really the troll?

As far as I’m concerned just follow a few rules and use discretion and you should generally be okay.  I’ve gotten better at this as I’ve gotten older – I’ve grown up (a little) and owning a business that is really a people business has given me new and varied perspectives.  Besides, representing a brand online forces you to exercise restraint and diplomacy.

1) Be nice to people

2) Choose your words carefully knowing that a typed message can be interpreted differently than when you say it out loud.

3) Be careful talking about religion or politics and maybe think twice about bringing it up at all in a public forum – strangers will likely attack you.

4) Remember 1,2, and 3 but – don’t be scared to share your thoughts.  If someone attacks you for a thoughtful comment that doesn’t fall exactly into line with the opinion of the blogger and his/her minions then who is really the troll?  A blogger who bullies people into fear of reprisals if they disagree is a blogger you may not want to follow.