Summit Live was an incredible experience.  Yes it was.  Just simple truth.  It is hard to describe unless you were there what it was like, but I’ll just say that the first night I had a moment where I looked around and was just really overwhelmed.  One of those feelings that will stay with you for a long long time, and I swear I’m not just being dramatic.  It was such a special feeling to be a part of such a great community with people you have been enjoying spending time with, learning from, laughing with, and admiring virtually for months, and then suddenly you’re hugging them one by one….by one, by one, by one, by one – one favorite to the next to the next.  Your head starts to spin and you start to feel this buzz and you know this is a really special moment in your life.  It might sound a little ridiculous but that’s the truth.  At least for me it is and I’m not embarrassed to say it.  I’m pretty sure Ally felt the same way.

We started out pretty early with a flight that connected in Chicago where we did a quick shortened version of our morning show from the airport.  We were so hyped!  Note: these replays do not contain the comments that were made in the broadcasts… when we posted this originally they were embedded from Katch.me and that website no longer exists.  These are the raw feeds that we now have on our YouTube channel. 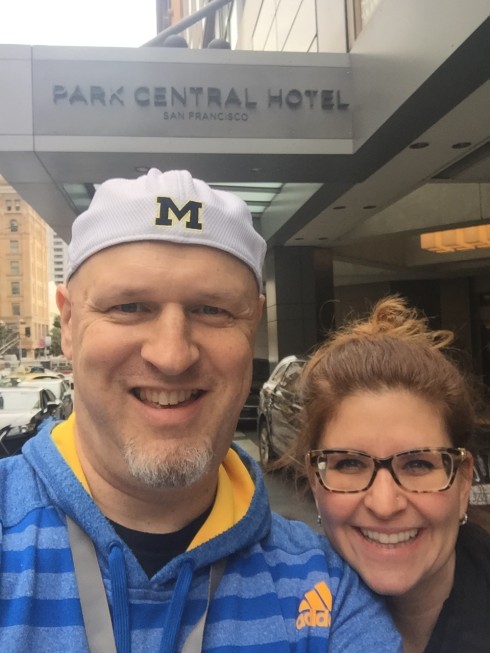 Arriving at the Park Central!

When we finally arrived in San Francisco and walked up to the front entrance of the Park Central Hotel we had our first surreal moment as a crew of our people came flooding out the door right at that moment for hugs all around!

We still needed to check in and we had a few hours before the festivities so we went off on our own for a while.  San Francisco is amazing and Ally had never been there.  I had been there once a little over 22 years ago and was eager to get back.  We started out at the Ferry Building and hung out on our own where we ate at The Slanted Door and sampled some ice cream from Humphry Slocombe and some toffee from GL Alfieri – both delicious.

From there we walked to North Beach to meet up with my old college buddy Jeff Meisel for a cup of coffee at Réveille Coffee Co. before we headed back to the Park Central Hotel to start the party… 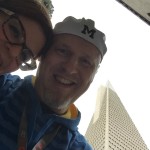 Once we went down to the opening party that’s when that overwhelming moment happened that I was referring to earlier…  and at that point I had to start scoping.  I have gone through and listed the people who appear in the broadcast at what time marker in case there is anyone you would like to see:

@YoPickless appears at the 4:53 mark.  LOVE this girl – she was handing out #Yopickles #PassTheTat tattoos and she is beautiful in person!

@BenLeonard appears at about the 8:33 mark.  What a nice guy he is!  Pretty much everyone was really cool.

@CathyHackl at 9:40 – one of our closest friends in the community and she is expecting their third child!  You’ve seen her and her family appear on this blog here.  Love her!

@VictoriaTaylUK at about 12:10 – Vikki was on the small business panel with us and what a sweetheart.  We actually first met her on another live streaming app called Blab.  She’s great!  Had a lot of fun with her.

@KatieLance and @TigerwonNYC appear at 12:46.  Katie is my favorite social media “guru” on Periscope – her blog is awesome and I always learn something new from her.  She really knows her stuff.  Tiger we had met before at a meetup in NYC last summer and she interviewed me later on during Summit Live.

@TerryLWhite shows up at around 14:20.  He was on the photography panel that Ally moderated and he actually used to have a photography studio in Troy not far from our studio.  He’s currently based in Atlanta and he’s an Adobe expert.  Good guy!

@RyanSteinolfson aka “Periscope Ryan” appears right after Terry at around the 15 minute mark.  A digital marketer based in San Diego, I felt a little bad that my Wolverines destroyed his Gators in the Citrus Bowl – okay maybe not that bad, but we hung out and talked shop quite a bit over the 4 days we were there.  What a great dude.

@JelCruz at 16:33 – this is funny – one of those whose name you’ve seen but don’t recognize right away in person!  What a sweetie!  Got to hang with her a little bit during summit.

@EthanPariseau shows up right around the 20 minute mark – we “hang out” with Ethan often on our morning show.  Good guy from the state to the south – Ohio…

@KristianCotta pops in right after that around 20:14 – personal trainer, social media consultant and Washington State alum who is still bitter about the 1998 Rose Bowl… (hahaha).  Had a great time with this guy!

@MarissaDunlap shows up at the 22 minute mark and of course Ally and I had to “sing her into” the scope as we do on our regular scopes.  Marissa lives not far from San Fran and she can sing some mean opera.

@ChrisStrub at the 22:50 mark is known for just completing an intense trek of volunteering with youth organizations in all 50 states!  What a bad ass.

@AECJosh is one of the three creators of @TheEditorTV which is a network on Periscope that we’ve been on a few times and he shows up at the 24:26 mark.  He was there with his lovely wife @TheCraftyCutie

@ChocolateJohnny appears at about the 27 minute mark.  Owner of Perfection Chocolates in Sydney, Australia, he moderated our small business panel and did a fantastic job.  As a small business owner like us we have connected and have been bouncing ideas off of each other for months.  He brought us some chocolate and it was fantastic!

At around 30 minutes we met a couple of really nice guys whose names I can’t remember as of this writing!!!  Dangit….  if someone lets me know I’ll update this post!

@JasonStolken and his beautiful wife @RosieStolken appear at 32:42.  We’ve talked on the phone before but had not met until this moment.  Great couple and we got to spend a decent amount of time with them.  One of the best, funny and genuinely good guys in the community.  He even gave the classic “high face” in my broadcast!  Haha!

@KeiphMaurice is the creator of www.playforstuff.com which is a network of game shows across Periscope where you can play for prizes and our Play For Stuff show should be debuting next week!  Keith makes his appearance at 37:58.

@MrASingh is an artist and a really deep thinker – he does a lot of inspirational philosophical scopes from the UK and he appears at 38:50.  I of course had to do a little British accent trolling on Amrit when I saw him…

@DaveGonz2012 I met at the 40:30 mark – don’t actually know Dave very well but a nice guy and Ally and Dave  had an opportunity later to talk a little photography.

@EricNeitzel at about the 41:20 mark is an awesome guy.  He was on the photography panel as well and we have been Peri-friends with Eric for a while.  He has used his photography to help document and provide information from choppers during wildfires among many other things.

@SandyChoiRadio at the 42 minute mark is definitely one of my favorite scopers.  I’ve spent a lot of time late night just hanging with Sandy on her scopes listening to her freestyle, play guitar, sing, rant, and whatever else she feels like.  The girl is fearless and will say whatever is on her mind.  She keeps it real and we were so glad we got to spend a lot of time with her on this trip.

@DieterDieterVB at the 42:40 mark – what a sweetheart of a guy.  A photography enthusiast, Ally was able to help him out with a couple of tips and we were happy we were able to hang with him as well.

Mr. @Ryan_A_Bell himself – the creator of the Periscope Community Summit and one of our most notorious trolls – creator of the @FlammableFeces account appears at about the 43:30 minute mark.  All joking aside he’s been a big supporter of ours and it was great to meet him in person.

@AfricaMiranda gave one of the most inspiring talks you’ll hear as one of the keynote speakers at summit.  A beauty inside and out and a very talented and accomplished girl – we’ve been fans of hers for a while and she appears at the 44:45 mark.

Whew…..  okay.  Here are a couple fun iPhone photos from that first night… 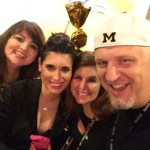 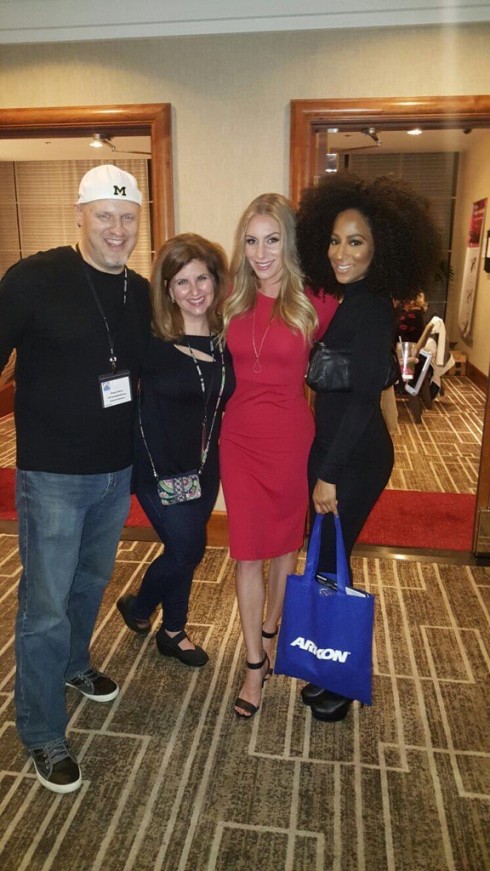 With Courtney Harvey (next to Ally) and Africa Miranda (far right)

We spent a lot of time with @LynnRose (wonderful actress and singer), @JennyQ – Jennifer Quinn who is a host of The Daily Q on Blab.IM, and @MsCandyBlog – one of the most entertaining people on Periscope with her amazing candy review shows, throughout those 4 days – love each one of them!  We also loved meeting @CourtTheTrendLA – Courtney Harvey who is an E! News producer and host of The Trend LA, and of course Africa Miranda as we mentioned before!

Okay that will do it for now – the next post we will get into the panels we participated in as well as meeting more friends including Sock Cop and the Periscope Puppet….  stay tuned!!!!