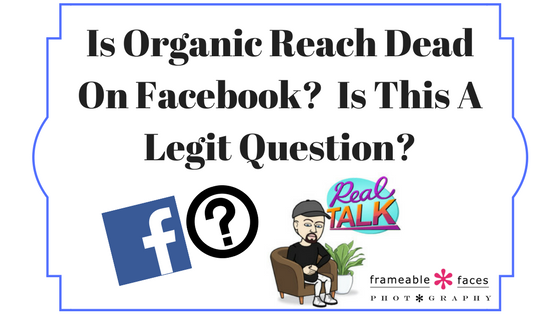 Is organic reach dead on Facebook?  Do you have to spend advertising dollars to reach anyone on Facebook now?  I hear people say this more and more….  As I’ve written here before I participate weekly in a live Twitter chat and broadcast on Periscope called #LetsLivestream.  It’s always a good discussion with many great guests and nice production value hosted by Jonathan Tripp, and once in a while a topic or a take in the conversation gets me thinking about a blog post.  This week the topic was promotion of your live streams – best practices for promoting, various tools etc.  Question 4 is the one that got me going: 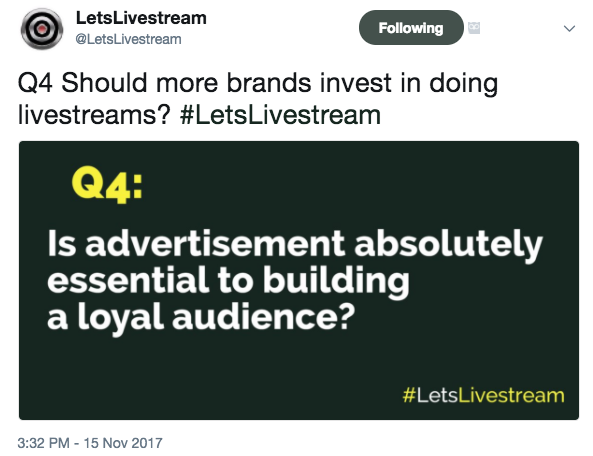 Here was my answer: 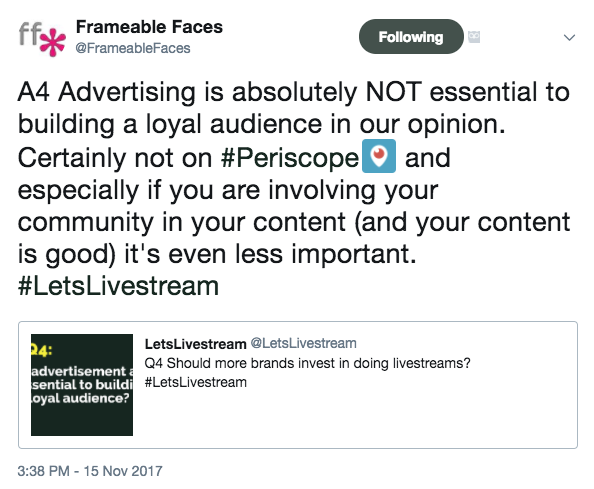 A bit of a contrarian view perhaps (Wait – MOI?  A contrarian view?), and even though I referenced Periscope in my tweet (keep in mind the livestream takes place ON Periscope), I continued on to include Facebook Live in my point in the chat.  At that point my esteemed friend Jenn Nelson of @JennsLIVE & @WineAntics who helps produce the show chimed in with the comment “ORGANIC REACH IS DEAD ON FACEBOOK!!!”  And then this happened: 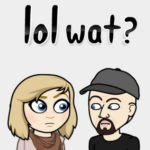 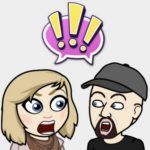 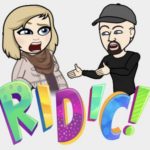 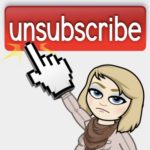 This was going nowhere.  We agreed to continue the discussion offline after the show which we did.

I sent her these screen shots of recent analytics for our Facebook page with the organic reach numbers – these represent all the posts we made on the Frameable Faces page from 10/3/17 to 11/14/17: 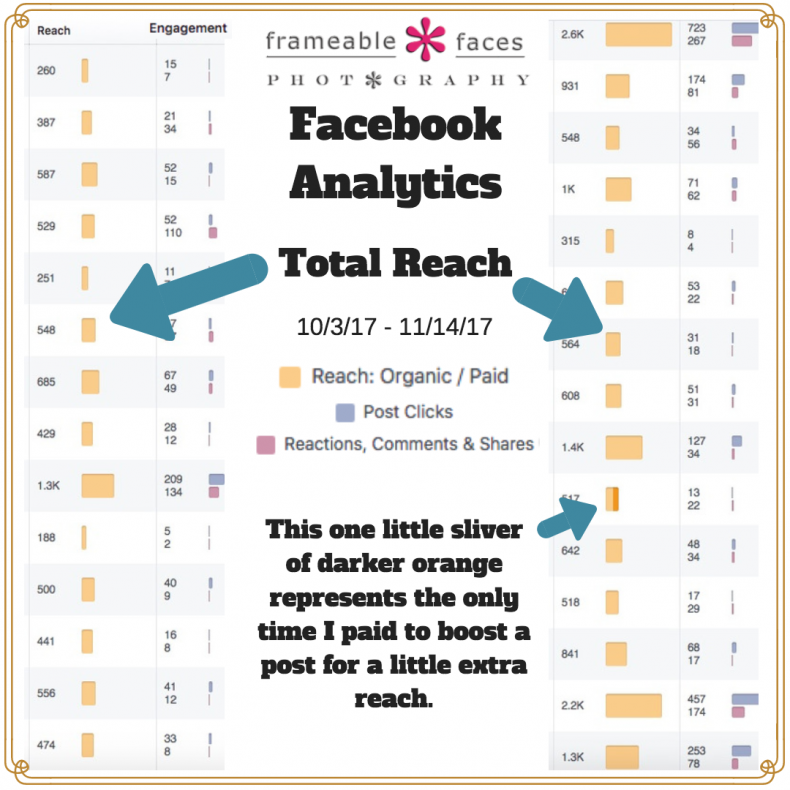 Note that as of this writing we have a TOTAL of 1792 followers of our page.  You too can be a follower!  Give us a “Like”!!!  Okay sorry that was very shameless and spammy.  I digress.  But the point is you’ll note in the numbers above that virtually ALL of our reach has been non-paid.  There is one sliver of darker orange that represents a bit of boosted / paid reach when we spent a couple dollars to get one post going a little.  In this snapshot of time the reach on our posts range anywhere from 188 at the lowest to 2.6k at the highest and roughly half of these were Livestreams.  The livestreams didn’t have the peaks and valleys that the other posts did, generally ranging between a more consistent 500-1000.  Meanwhile, YES – we still get plenty of organic reach and a handful of posts still go beyond the followers of our page without paying on Facebook!

Is This Even A Legit Question?

Now here is where the debate gets interesting.  Jenn’s point which is shared by many is that Facebook doesn’t just automatically dole out free reach for your business page anymore.  And she’s right to a point.  Little by little Facebook has pulled back on how much they’ll push your content out to your followers, and many feel like it’s become closer and closer to a full on pay-to-play model to get any reach.  Each time the announcement / rumor comes out that they’ve tweaked the algorithm again my response is the very same every time:  Crappy content continues to get less organic reach on #Facebook. Good content still gets plenty. frameablefaces.com/2017-11-16-organic-reach-dead-facebook/ Click To Tweet

So my question is what IS organic reach?  See the following conversation between Jenn and me: 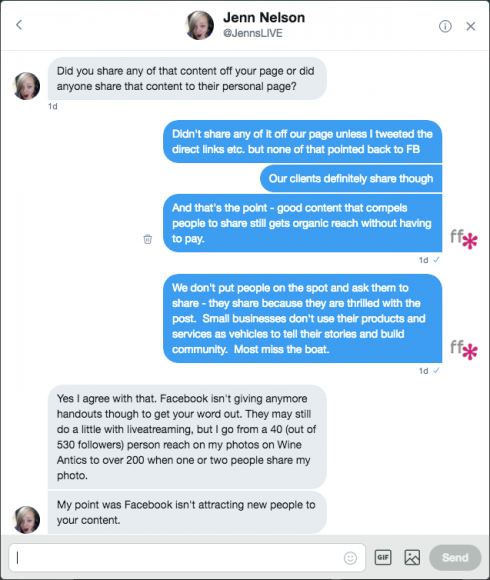 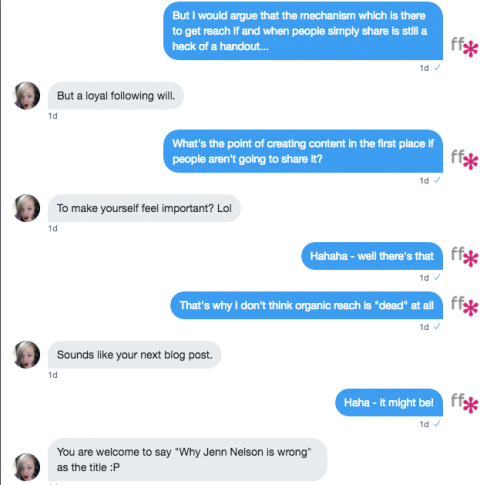 How great is Jenn?  Give her a like / follow!  But here’s the question (to her point), a typical post of hers might only reach 40 people on Facebook on its own.  That’s what Facebook is just handing her out of the gate.  I would still argue that that is still not purely an automatic just because she posted – those 40 people on some level have to be 1) followers that have 2) likely shown some affinity towards her page through their Facebook behavior.  Now once someone shares it it may bump right up to 200 and so on.  Isn’t that STILL “organic”?  In other words, good content that compels people to share will still gain reach organically.  If that’s not still considered organic then what’s the point of even talking about “organic reach”?  As I said to Jenn what’s the point of even creating content in the first place if no one is going to share it?  If a post falls in the Facebook Forest and no one sees it did it really happen?  Shares, likes, comments – engagement – is part of the deal with organic.  That’s the reason we do this in the first place.

Which brings us back to the same old tried and true principle of Facebook and ALL social media in general.  Make sure you are entertaining, teaching, engaging – providing value with good content and you will still get that organic reach!!!!  I created this meme a while back as kind of my favorite quote for small businesses – kind of my little calling card….  follow this and yes – there is still organic reach to be had everywhere on social media.  Even on Facebook. 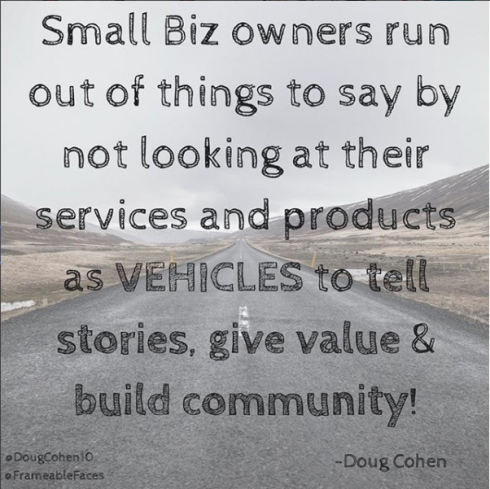